Eliminate all of your wasps and carpenter bees with Prime Pest Control.

Eliminate all of your wasps and carpenter bees with Prime Pest Control. 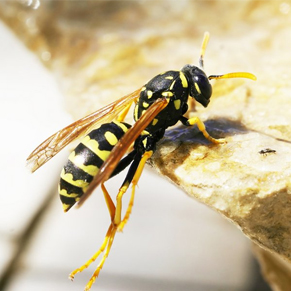 Wasps are a hovering disturbance to the peace of your community. In the Greater Toronto Area, there are many properties facing wasp infestation. Many consider wasps to be physically synonymous with bees, but they have foundational differences between them. The most prominent being that wasps seem to operate on provoked offense, unlike bees that only attack to save themselves. A wasp’s nest conventionally resembles a papery texture, which is completely different from a bee’s maze. Wasps also have a tendency to feed on larva of other minute insects, along with various plant produce. Carpenter Bees look fuller and have a furrier appearance. An interesting fact is that a male carpenter bee does have the physical modification of stingers, but a female carpenter bee can totally attack, if stimulated. Usually a wasp’s nest is small in size, when the construction starts in the beginning of the spring season, but over the time it grows in epic proportions. Infamous for their tendency to bite unsuspecting humans, such nests can be a lot of trouble.

The construction of a wasp nest can damage the surrounding infrastructure, especially your roofs and walls, if the nest is constructed within your property. Wasps and carpenter bees bites can leave a deep physical ache in victims.

Deduce the Nature of Infestation

A nest is the main shelter to all the wasps and carpenter bees in your area. As such if you find them hovering in your lawns and backyards, there are certain chances that a nest is present in the vicinity of your home or work place.

Wasps and carpenter Bees are known to attack humans frequently. We would advise you not to take chances on your own and contact a professional for help as any carelessness may result in a lot of bites.

Wasp and Carpenter bees usually make nest, if they find the place suitable for them. To avoid an infestation, look for a nest if you happen to notice their presence and allow professionals to deal with it.

Fill out our online form for a free quote!